If you're new to CAA, we invite you to tell us about yourself here. This is the place to post your own bio or read up on other members. Be as in depth as you like!
Post a reply
13 posts • Page 1 of 1

Yo, yo, yo what's up everyone. As you can probably see I'm SharkBiteDynamite, and new...duh xD, but feel free to call me by my nickname BuckyJay, or just one or the other I don't really care.
I have a strange interests in pirates and am pretty much obsessed..wait no very passionate(lol) about all things anime and manga.
My favorite types of things tend to do with fantasy, large monsters, and characters that can turn into some form of animal or another. Gun fights also get me into shows also so if you know any anime with lots of guns let me know haha.

I'm fairly interested in the roleplaying world and would like to learn since I suck at it...probably should do it more then lol.
Well, that's pretty much it for me. Feel free to ask me questions :3

P.S. I love weapons! Got a really cool one or just something you think would look cool, send me a pic/description!

What's your favorite anime and/or manga?

'What one does not understand one fears. What one fears, one destroys.' -Native American Indian Proverb
"Man: What surprises you most about mankind? God: That they get bored with childhood, they rush to grow up, and then long to be children again. That they lose their health to make money and then lose their money to restore their health. That by thinking anxiously about the future, they forget the present, such that they live in neither the present nor the future. That they live as though they will never die and die as though they never lived."
"God expects spiritual fruit not religious nuts." 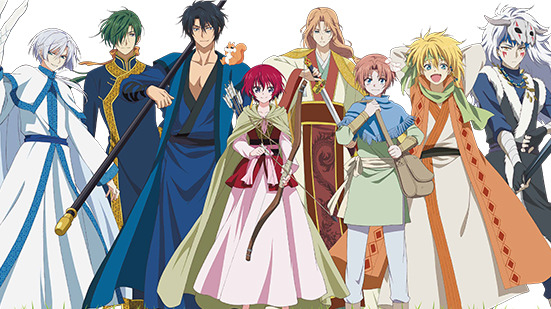 What's your favorite anime and/or manga?

Why thank ya for the welcome!

My favorite anime....well, I guess as of currently I'm going to have to pick Skip Beat. The humor is just too much and I can't get enough of it!
Too bad real life isn't like that

As for manga...haven't read enough to decide

That name is interesting, why'd you choose it?

Welcome to CAA by the way. Hope you can learn to roleplay better

I still haven't, but I can write better for sure.
And this I pray, that your love would abound still, more and more with real knowledge and all discernment. Be prepared to preach the gospel at a moment's notice. Do you know the gospel well enough to do so yourself? Be ready.


Good timing, the RP forum should be waking back up a bit now that nanowrimo is over.
MAL - CAA MAL club - Avatar from Hyouka
"DaughterOfZion 06:19 - forget love, fudge conquers all. xD"
"Written assignments are never finished, only due." -me
-Speak not unless you can improve the silence.-
MOES: Members Observing Efficient Sigs

Furen wrote:That name is interesting, why'd you choose it?

I chose my username, because of shark week earlier this year. Was way too into the show, but hey no one seemed to mind xD

Welcome, welcome.
Oh! Another roleplay victim! MoI speaks truth. Now that NaNo is over we should be getting back into it. Things have been sitting around collecting dust lately. We always love new participants, so come over and see if there's anything that interests you if you get the chance!
Your username amuses me and I love it.
Are you allergic to robots?
He hath shewed thee, O man, what is good; and what doth the Lord require of thee, but to do justly, and to love mercy, and to walk humbly with thy God? -Micah 6:8 KJV
They have shewed thee, O teen, what is good; and what doth the world require of thee, but to fit in, be wealthy, have good looks, and be rebellious? -Peer Pressure 1:1
"I hate milk; it's like drinking vomit." -Edward Elric and me.

ClaecElric4God wrote:Your username amuses me and I love it.
Are you allergic to robots?

Well, thank ya and as for your question, I know not. Don't think the tested me for those in the lab haha so as far as I know I'm not...let's just hope it stays that way lol would be bad in the event that I happen to be allergic and the robots take over the world haha

Nice to know we have another roleplayer, seeing that silent board just rips my heart out.
Lol welcome to Christian Anime Asylum (that's what CAA really stands for) I hope you enjoy your stay. You can bunk down and share a room with MOI and the BananaLobster. But be careful, the MOI bites and the lobster....*shudder*
"Show me thy ways, O Lord; teach me thy paths. Lead me in thy truth, and teach me: for thou art the God of my salvation; on thee do I wait all the day." Psalm 25:4-5

What kind of music are you into?

Also, if you want an anime with lots of gun fights, you should seriously watch Black Lagoon if you haven't. If you want lots of guns, explosions, killing, etc. that's the anime for you. Its lots of fun!

You also could try out Cowboy Bebop and Gungrave. I personally prefer those ones to Black Lagoon; however, BL is definitely more action packed. Canaan could also be an option. I just started it, so I can't say for sure if its what you're looking for, but it seems to be up that alley.

MyAnimeList - Anime-Planet - A room with a moose

What kind of music are you into?

Also, if you want an anime with lots of gun fights, you should seriously watch Black Lagoon if you haven't. If you want lots of guns, explosions, killing, etc. that's the anime for you. Its lots of fun!

You also could try out Cowboy Bebop and Gungrave. I personally prefer those ones to Black Lagoon; however, BL is definitely more action packed. Canaan could also be an option. I just started it, so I can't say for sure if its what you're looking for, but it seems to be up that alley.

For the music...I'm not to sure, I listen to like everything haha, but if I had to pick something it would probably be anything foreign with the words so I can't understand. That kind amuses me for some reason.

And I thanks you for all the anime suggestions I'll definitely go check them out sometime!*adds them to list*

My favorite types of things tend to do with fantasy, large monsters, and characters that can turn into some form of animal or another. Gun fights also get me into shows also so if you know any anime with lots of guns let me know haha.

You should definitely read the manga Katsute Kami Datta Kemono-tachi e (To the beasts who once were gods). It is very new and only has a few chapters out, but it's a fantasy shonen with a bunch of cool-looking huge monsters, characters that turn into monsters (most of them can't turn back though), and a female lead who carries around an elephant gun and occasionally uses it. Should be right up your alley.

Gunslinger Girl. Despite what the title may sound like, it actually has a very serious plot. The first season of the anime was pretty good but only covered a small portion of the manga story. I haven't seen anything past the first season, so I don't know how the second season or the OVAs are.

Hellsing. The original TV series was not extremely highly-regarded, though I enjoyed it at the time. The Bloodlust OVAs were well-received. Two of the main characters who use guns that are too heavy for humans to wield, which they are able to do because they are vampires and have super-strength. Even though I'm not a weapons aficionado myself, I think these are pretty awesome, especially Alucard's pistols.

Trigun. The anime is a 90s classic and features a main character who is a pacifist but also an excellent marksman who goes around using his gun in battle without killing anyone. One of the other main characters, Wolfwood, is also an excellent gunman and has a . . . very distinctive weapon. On a side note, I think I recall hearing that the author of the original manga is Catholic.

Here are some previews:

^Hellsing manga
Let others believe in the God who brings men to trial and judges them. I shall cling to the God who resurrects the dead.
-St. Nikolai Velimirovich

Hello and welcome to caa. Hope you have a blast

Maybe you want to try gundam series. Yes it is about mecha but there are some guns there.

Users browsing this forum: No registered users and 34 guests